Although there was no data to explain why, it has been anticipated for some time that the Dollar would strengthen. With all the talk about the US Fed raising its rates and a faster pace of rate hikes, with some even talking about a 75-basis point hike, the markets piled their funds into the USD. 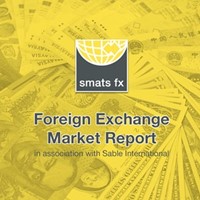 The Dollar reigned supreme after strengthening against all its top 19 trading pairs, most notably against the ZAR at (6.86%) and the AUD (2.54%).

Although there was no data to explain why, it has been anticipated for some time that the Dollar would strengthen. With all the talk about the US Fed raising its rates and a faster pace of rate hikes, with some even talking about a 75-basis point hike, the markets piled their funds into the USD.

This week, analysts will monitor the Dollar’s progress and if the currency can retain this influx of power. There will be minimal data from the US with the most notable event being the GDP growth rate on Thursday. The GDP growth is expected to moderate drastically to 1.1% from a previous print of 6.9%. If anything, this could put a damper on the USD’s recent surge.

The drop in the GBP was accredited to the disappointing UK data. Retail sales growth remained negative and consumer confidence hit lows last seen during the peak of the Covid pandemic. Other, more obvious, factors include major energy price increases that are currently hitting the UK consumer, the long-term effect of which is still unknown.

There is no significant UK data to be released this week. There will, however, be a few speeches from various members of the Bank of England (BoE), which should be monitored. These speeches will provide insight into how the BoE will handle inflation and its outlook on the market.

The war in Ukraine remains a major factor at play with the EUR. Due to higher energy prices and the increased possibility of food shortages resulting from the conflict, EUR inflation has hit all-time highs at every print. Additionally, there have been comments from various sides about the possibility of interest rate hikes by the European Central Bank, but this has yet to be implemented.

The major event within the EU is that Emmanuel Macron won the French presidential election. This strengthened the EUR as it removed the uncertainty of a new leader of France. On Friday, we have a flurry of EU data, including the GDP data, which is expected to increase, and the EU inflation data, which, as previously stated, should be hitting another high.

In tandem with the ZAR and commodity currencies, the AUD dipped in the past week, but there was little data to rationalise or validate this. A plausible explanation was due to the Covid outbreaks in China influencing trade with Australia.

Last week, New Zealand inflation hit highs not seen since the 1990s. This may add weight to the rumor that the Reserve Bank of New Zealand (RBNZ) might raise interest rates faster than previously anticipated.

This week, the New Zealand trade balance will be released. The deficit is expected to decrease and should be positive for the NZD. Overall, it would not be the major moving factor on the NZD trade.

The South African Rand had an astronomically bad week, weakening against all its major trading pairs. The largest losses were against the EUR (-6.72%) and the USD (-6.86%).

Many analysts believed this would happen, as the ZAR kept strengthening with little backing the moves over the past few months. Therefore, it would make sense that a barrage of speculative money had been moving the currency to some degree. In addition, the drop in the gold price lowered faith in the currency. South Africa also faced another catastrophe with flooding at its main port in Durban. As a final slap in the face to the ZAR, the country was plunged into stage 4 loadshedding, a perfect storm of negative factors to kick the ZAR from its overperforming perch.

For South African data, the trade balance for March will be released on Friday. This is expected to remain positive for the time being. Analysts will watch the Rand to see if this was a short-lived drastic depreciation or if the Rand will remain on its weakening course.