Last week, the US Dollar strengthened against all 19 currencies we monitor. The most drastic upside movements were against the Brazilian Real (BRL) (4.40%) and Turkish Lira (TRY) (4.30%). 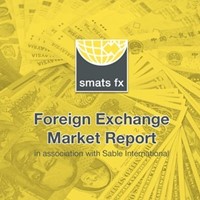 We have excluded the Russian Ruble from the analysis in our report due to the extreme volatility associated with the currency.

Last week, the US Dollar strengthened against all 19 currencies we monitor. The most drastic upside movements were against the Brazilian Real (BRL) (4.40%) and Turkish Lira (TRY) (4.30%).

The main US data event last week was the inflation data. After higher-than-anticipated inflation figures were released, the market is pricing in the possibility of a 75-basis-point (bps) hike in Fed rate. The current inflation is broad-based; thus, it is now spilling over from goods to services. This is worrying for the Fed, since goods inflation can be reversed by more supply, whereas services inflation proves to be stickier, and companies are more reluctant to drop services prices once they have risen.

This week, the US retail sales data and the US Fed interest rate decision will be released on Wednesday. Currently, the market is expecting a 50bps hike, but if the US Fed chair, Jerome Powell, surprises to the upside with a 75bps hike, the USD will rally off the back of that. We have already seen a broad-based selloff in risky assets in anticipation of the hike.

The European Central Bank (ECB) interest rate decision was released on Thursday and, as expected, it did not raise rates. The ECB has made it extremely clear it will be raising rates by 25bps at its next meeting, with a likely hike in the meeting after that as well. This has helped the EUR but leads to other problems as there is a spillover effect on the bond pricing between the various European countries which is dragging on the EUR rally.

This week, the main event is the Euro area inflation data, which will be released on Friday. This is expected to show another higher print of 8.1% (YoY), adding to the pressure on the ECB to raise rates in the next meeting.

There was minimal data from the UK last week with the market preoccupied by the vote of no confidence in Boris Johnson, which he survived in the end.

This week, the UK GDP data will be released this morning (13 June) and is anticipated to show meager, yet positive growth of 0.1%. If it does disappoint and decreases, we can expect the GBP to take a hit. Additionally, the UK interest rate decision will be released on Thursday, following the US rate decision on Wednesday. The market is pricing in a hike of 25bps, which leads to the possibility to disappoint when compared to other central banks – such as in the US. We look to see the forward guidance from BoE Governor, Andrew Bailey, regarding the bank’s projections on growth and future interest rate hikes.

South Africa released an array of positive data last week. The GDP growth rate for Q1 hit 3% (YoY), double the 1.5% figure that the market was expecting. The ZAR strengthened off the back of this, but the good times were short lived, with a drop in the ZAR against most of the major currencies. The higher GDP print was aided by the increased gold prices, thus should not be mistaken for a notable bounce in the economy as a whole.

This week, there will be minimal impactful data from South Africa. The main event will be the South African retail sales for April, which is expected to increase slightly. The currency will take its cues from global central bank movements, so some extreme volatility can be expected.

Last week, the RBA surprised markets and increased rates by 50bps, where the market was pricing in a 25bps hike, and this strengthened the AUD. This was reversed by the end of the week, with the AUD selling off against most majors.

This week, both the business and consumer confidence data will be released and are expected to show some improvement, which is always a good thing. We should keep a keen eye on developments in China regarding lockdowns as they are a major trading partner to Australia.

There was minimal data from New Zealand, with the market taking its cues from global developments rather than locally.

This week, the GDP growth figures will be released on Thursday, where a small, but positive figure is expected. Overall, the NZD will most likely be more influenced by global central bank interest rate decisions over the next week.