At our recent Australian Budget Review seminar series, the following Budget Credibility Analysis chart was presented to clearly show how successive Australian governments had faired from what was presented at each budget night from 2002 to 2018.
Matthew Heron
Tuesday, May 14, 2019 - Budget, Analysis 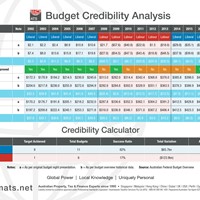 At our recent Australian Budget Review seminar series, the following Budget Credibility Analysis chart was presented to clearly show how successive Australian governments had faired from what was presented at each budget night from 2002 to 2018.

The table has been collated from the Australian Federal Budget Overview papers for each respective year and shows the budgeted forecast against the actual result achieved in each category of net position income and expenditure. 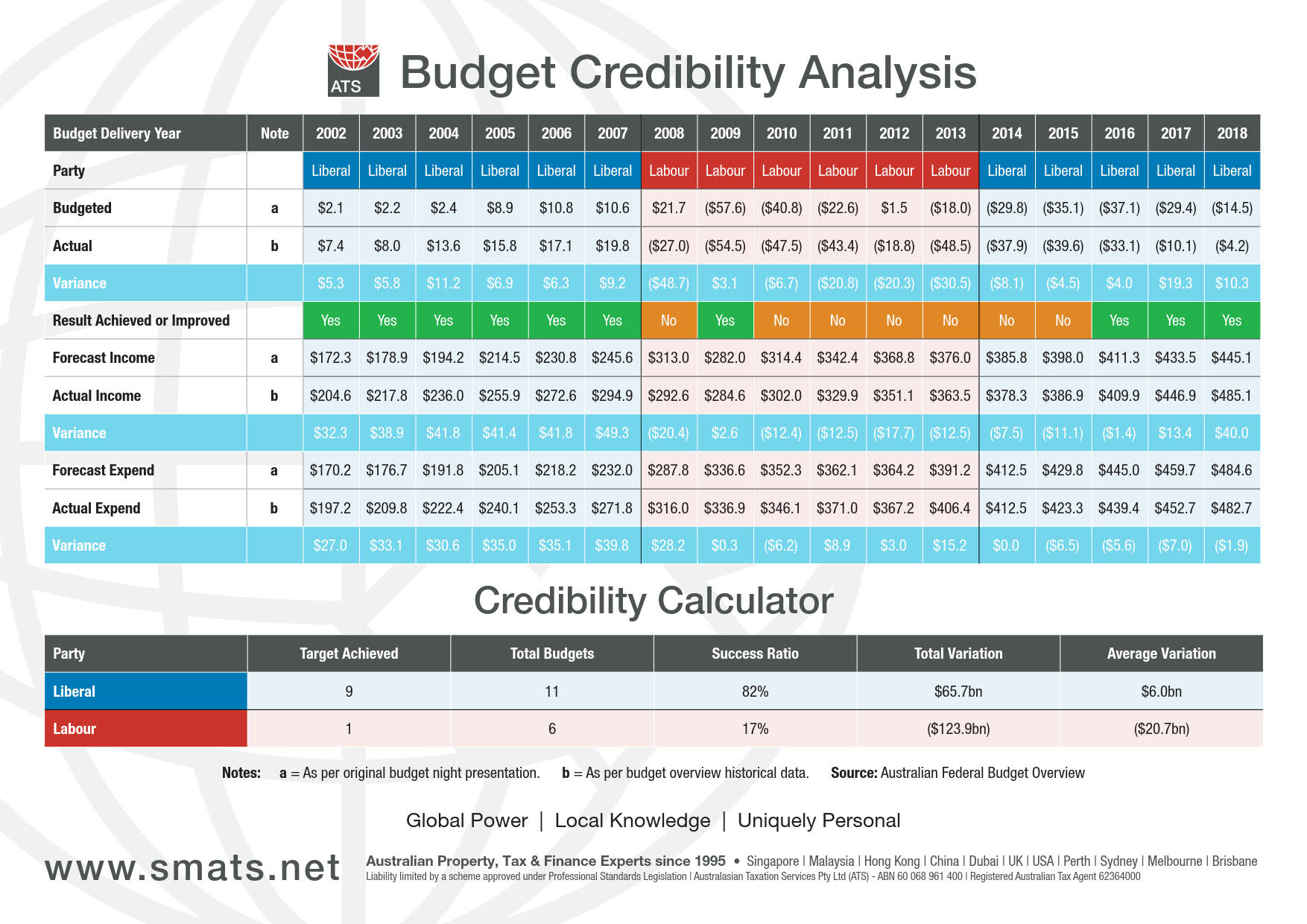 When looking at the Credibility Calculator table we have measured the ratio of successful achievement to forecast and the variation against the net income forecast on an accumulation and average basis.

In summary, the Liberal Government has achieved a success ratio of 82% (9 out of 11 budgets) in achieving or improving on their forecasted net incomes, which is quite an incredible achievement in the modern political environment.

In contrast, the Labor Party only achieved this feat on one occasion of their 6 budgets, a success ration of just 17%. During these six Labor budgets there was a regular assertion that these misses were a result of lost revenue. There is no doubt in 2008 and 2009 the revenue was softer as a result of the Global Financial Crisis however, the major contributor was an escalation of expenditure.

In the years 2010 to 2013 revenues rose sharply but could not catch up with expenditure commitments pushing the deficit beyond predictions. This is evidenced strongly in 2012 where then Treasurer Wayne Swan had forecast and promised a $1.5bn surplus to find the actual result a $18.8bn deficit, despite actual revenue growth of $21.2bn during the same period.

The key difference between the financial credibility of each party is best demonstrated by the average variation between actual and forecast. The Liberal Governments improved their budget estimates by $65.7bn; with an average positive variation of $6.0bn. Compare this result with the Labour Governments who missed their budget forecasts by a staggering $123.9bn over 6 budgets, with an average negative variation of $20.7bn.

This 'measure-of-miss' shows how important credibility is when promising big cuts or big spends. Particularly in an election year.

What is concerning is that the Labor Party is returning to its high tax, high spend methodology that produced these poor financial outcomes previously. If financial governance was the sole determining factor of this election then these statistics certainly give something for the Australian electorate to think about as they head to the polls to vote on the 18th May to decide who will be the next Federal Government of Australia.